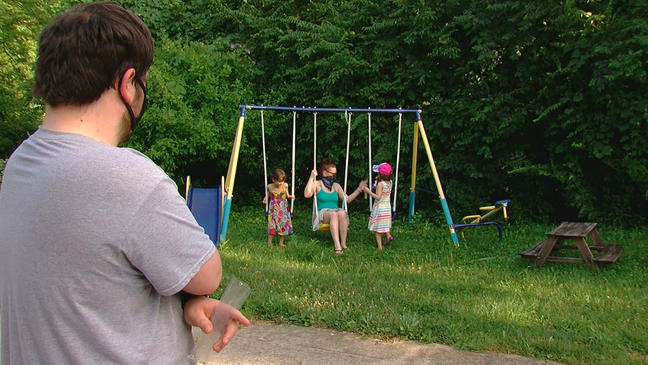 With $0 left, an Ohio father said he was out of options to provide for his family. When the landlord came knocking on the door, he feared the worst, but what happened next was an unexpected gift.

Ten weeks ago, Wes Moberly was laid off from his information technology job. He hasn’t had a paycheck since.

“I’m worried about borrowing money from people to get my phone line turned back on, worrying about when my internet is going to get disconnected because then I can’t even do freelance work, or, if I get a job, I won’t be able to do that,” said Moberly.

Moberly and his fiance used up their savings to provide for twin 5-year-old daughters Lana and Lily.

“You know, make sure they have food to eat and a place to live and clothes to wear,” said Moberly.

“They always pay their rent on time. They paid in May, and then June came and then July and I had not heard from them,” said Lewis.

Instead of an eviction notice, Lewis decided to help them out.

He let them stay in the house and gave them money right out of his pocket.

“He gave us $100 because I told him, like, our phone line had been turned off and we had $0 left at that point,” said Moberly. “The other big thing was, like, do we have a place to live? And now that we don’t have to worry about that for the time being, that’s just a mountain of stress off my shoulders.”

Many of Lewis’ tenants cannot make the rent right now. On Wednesday, the county announced a program to help them pay.

“With the moratorium on evictions for renters living in publicly owned housing this week, and Duke Energy possibly lifting their moratorium some time in August, additional funds for unemployment benefits set to expire soon, this money came just at the right time,” said Kim McClendon with the Community Action Agency.

In the meantime, Lewis said he is working out payment plans for families like Moberly’s until everyone gets back on their feet.

“Do unto others as you would want them to do unto you,” said Lewis.